Review of No More Heroes 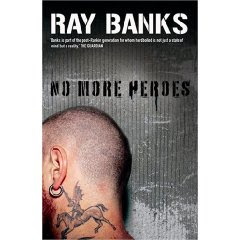 The third time is the charm for Ray Banks. No More Heroes (Polygon, 2008), the latest in his ongoing series about Manchester’s sort-of private eye Cal Innes, is his best novel yet. One could level the criticism that Saturday’s Child’s reliance on two first-person points of view was a bit gimmicky, and the follow-up Donkey Punch didn’t quite hold together despite strong writing, but no such criticisms can be leveled against his latest book. No More Heroes is solid and satisfying.

Innes is back at work doing evictions for the city’s shadiest landlord, Don Plummer, when he ends up rescuing a child from a house someone has torched. The press makes him a local hero, which gives him the confidence to open his PI business again. His first and only client, however, is Plummer, who is taking a beating in the press and has reason to believe the arson of his property will not be an isolated incident. It doesn’t help that the people who occupied the burned house were asylum seekers and that the scorching summer temperatures are making people a little crazy. Uncovering the truth about the arson is the only chance Innes has of keeping from exploding in racial violence.

Banks’ writing is tight, and sharp, and American readers will no doubt be pleased he has dialed back the dialect a notch or two. Readers will no longer be forced to consult Samuel Johnson’s Big Book of Scottish Slang to figure out what the characters are saying. The plot, unlike that of his last novel, holds up all the way to the end, and doesn’t focus at all on Innes’ past as a convict or his relationship with local thugs the Tiernans. In letting some of Innes’ baggage fall to the wayside, Banks has written a novel that is easily accessible to the casual reader, and can be enjoyed just as much by people who haven’t read his previous novels as by those who have.