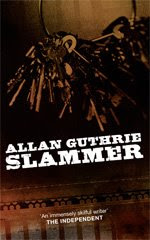 Working as a prison guard has to be one of the most thankless jobs in the world, even if you’re not working in a maximum security prison and your colleagues are decent, friendly types. Nick Glass, the character at the center of Allan Guthrie’s Slammer (Polygon, 2009), isn’t so lucky. He is a new guard at a prison nicknamed The Hilton" full of Scotland's worst offenders, and his coworkers aren't exactly friendly.

Glass is hardly on the job a couple of weeks before a murderer is pressuring him to smuggle drugs inside, and another thug is threatening his wife and child to give him an extra incentive to comply. He wants to keep his job but he wants to keep his family safe more, so he gives in and smuggles drugs, keeping a little back for himself, and starts on a quick, vicious downward spiral.

Slammer represents a departure for Guthrie in more than one way and is his most assured novel to date. His books up to this point have focused on unlikable thugs. Glass is a 22-year old kid who is full of good intentions, but hopelessly out of his depth. He's a bit weak, but he's not a bad guy, which makes his downfall much harder to watch than that of an average Guthrie character.

The story is also remarkably light on violence for a Guthrie novel. It seems Guthrie has realized that a sense of fear can be accomplished without decapitations and crucifixions. The tension in Slammer comes first from the dread of impending doom and later from the reader's confusion over exactly what has happened. Much of Guthrie's work can be read as a critique of a certain boneheaded definition of manhood. His books are filled with impotent, cuckolded thugs, tough guys with mommy issues, and the insanely jealous. For an author who enjoys mocking tough guys, however, his books are filled with grisly, pointlessly sensational acts of violence, as if he's daring the reader to look away, playing the very sort of games he's critiquing. It's as if he's smirking at the reader, saying "I can take it, can you?" Slammer is different. There is a terrible act of violence at the center of the novel, but it is entirely routine, which makes it much, much worse than any grand guignol tortures that Guthrie could have dreamed up. There's no sign of adolescent arrested development tough-guy posturing in Slammer. It is Guthrie's first grown-up novel.

Guthrie's writing style has also grown. His prose is tight. There is almost no description, but the few words Guthries does use stand out sharply enough to paint a vivid picture. He has also given up his habit of changing points-of-view. Slammer is written from a tight third person limited p.o.v. The story is Glass's and Guthrie tells it all from that perspective, making the surprises he's worked this tale all the more effective.

(And I'm giving away a copy of Slammer next Thursday, April 9. Details are here.)

What an excellent review, in and of itself. Yeah, I want to read that book.