As has been noted, Charles Ardai's novel Songs of Innocence, is not eligible for the Edgar this year because it is, under the MWA's rules, self-published. James Reasoner's novel, Dust Devils, it turns out, is not eligible either, because Point Blank does not meet the qualifications for an approved publisher, although it is certainly not a vanity press. I can understand having rules and sticking to them, but I've got to say these two books are both excellent pieces of work and the authors are pros with plenty of publishing credits to their name. I'm going to have to say I agree with this comment by Mr. Reasoner:

'Now that I've slept on it, an idea that someone brought up over on Sarah's blog makes a lot of sense to me: if an author qualifies for MWA membership, then his or her books should be eligible for the Edgars regardless of publisher. This would disqualify most of the truly self-published and vanity press books, while allowing authors like Charles Ardai and myself, who easily qualify for MWA membership because of our other publications, to submit books like SONGS OF INNOCENCE and DUST DEVILS for consideration."

The reason I think this idea is a good one is because it takes into consideration the fact that distribution methods are going to change. The MWA already allows ebooks into consideration, which is a smart move, considering how things are changing, but let's say an established author wants to pull a Radiohead, and make their work available on the Internet on a pay what you want format, or they have a work that a they have trouble finding a big publisher for. What then? Authors who qualify for membership in MWA are unlikely to turn out crap, even if it is published by a very small press, or even self published. If a pro wants to take a try at something unconventional or outside the mainstream that's no reason to exclude them.
Posted by Nathan Cain at 7:36 PM 1 comment:

As you may well remember, I optioned my Spinetingler Award nominated short story Amphetamine Logic to an independent film producer back in August. Well, Mitchell Cohen, the guy making the movie, just got his first short fim, Peter's Price, picked up for worldwide distribution. The article happens to mention that Mr. Cohen is currently in preproduction for the movie version of my 'acclaimed' story, so I take it the project is still on track. Just one more reason to vote for my story in the Spinetingler Awards, really. Who among my competition can say they sold the movie rights to their story?
Posted by Nathan Cain at 8:58 AM 2 comments:

I've been living under a rock since Thanksgiving, so much to my surprise, when I finally peek my head out and take a look around, there's all kinds of activity. First and foremost, the nominations for the Spinetingler Awards have been announced. They are gratifying on more than one level. First off, a lot of independent publishers got a lot of love, more than they usually do from more established awards. Just check out the nominations in these categories:

I am also thrilled to note that James Reasoner's novel Dust Devils has been nominated for Novel of the Year in the Legends category. (Point Blank Press isn't on the MWA approved publisher list. Why that is I don't know.)
Suffice to say, if you don't vote for Mr. Reasoner's book, I will punch you or at least make fun of your clothes and haircut.

I also note, with a certain degree of humility, that my story, Amphetamine Logic, is up for Best Short Story on the Web. The competition is stiff in that category. Charles Ardai has a story in that category, and he's already won an Edgar. I won't threaten you into voting for my story, the same way I'm threatening you to get you to vote for James Reasoner, because that wouldn't be kosher, but I'd appreciate the vote.

How do you vote, you ask? Well, I'm just going to let Sandra Ruttan, who organized this whole enterprise speak to that:

Voting is open. ONE E-MAIL PER PERSON ONLY. You cannot send another vote in, even for a different category – multiple votes from the same sender will not be counted. Take the time to consider your votes carefully. E-mails must be received by December 30, 2007 - authors, if you're putting this in your newsletter make sure you are clear about the deadline for voting. Many recommendations were not considered in the first round because they were sent late.You may vote for one winner in each category as long as all votes are submitted in one e-mail. Simply state the category and your chosen winner for each of the eight categories. Any votes that contain more than one selection per category may be removed from consideration completely. No ties. Send your e-mail to sandra.ruttan@spinetinglermag.com with AWARD NOMINATIONS in the subject line. It is not necessary to explain the reason for your vote.

While I'm at it I should note that it seems that Ardai's novel Songs of Innocence, seems to be ineligible for and Edgar because it is, under the MWA's new rules, "self-published." Sarah Weinman broke the story, and has an interesting discussion about the topic. I can see both sides, myself. I suspect that what it boils down to is the MWA is afraid that allowing Ardai's novel in will open the door for anyone to join, and that would pretty much make the MWA's existence moot. The entire point of clubs is to exclude people. Of course, Ardai's already got an Edgar, so it's not like he can't slap "From Edgar Winning Author" on everything he writes from here on out.
Posted by Nathan Cain at 12:31 PM 7 comments: 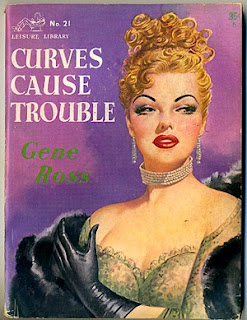 Another by Reginald Heade
Posted by Nathan Cain at 6:00 AM No comments:

What the Amazon search engine thinks of lawyers

I just finished Danny King's new book School For Scumbags, and went to Amazon to see when the book is scheduled for US release. Here are the search results.
Posted by Nathan Cain at 9:24 AM No comments: 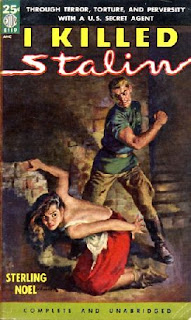 This should have been the title of Khruschev's memoirs
Posted by Nathan Cain at 10:35 AM No comments:

There's a nice article on Hard Case Crime in the Houston Chronicle. It's a little heavy on the Mickey Spillane angle, but still good.
Posted by Nathan Cain at 1:24 PM No comments:

Gerald So, fiction editor for Thrilling Detective, has decided to feature my short story Amphetamine Logic on his DetecToday discussion list, to which Chatterific is a companion. This is a pleasant surprise. He's also featuring the novel, When One Man Dies, by Dave White. (Thanks to Seth Harwood for pointing this out.)
Posted by Nathan Cain at 12:40 PM No comments: 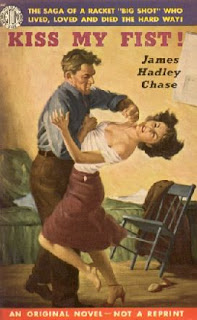 True Romance
Posted by Nathan Cain at 6:26 AM 1 comment:

The comic books series, which I wrote about here, has been optioned by Paramount pictures. The movie will be directed by David Fincher.

Thuglit's new issue is a good one.

And, have you ever wondered what it would be like if Renfield and Igor teamed up to work as private eyes in 50's LA? Neither have I, but you can find out here. (You have to click on channels and then select Strange Detective Tales. I can't figure out how to directly link to the episode.)

I'm not a huge fan of comics these days. I started collecting them when I was about 12 and gave it up when I was 16 or so, and discovered you know, girls and other stuff. Still, I like crime stories, and there are a fair number of crime comics. Where can I find these comics, you ask? Well, here. It's like Amazon for comics. Subscribe individual issues or, if you prefer graphic novel compilations, subscribe to those. Also, you can find out about a lot of stuff you didn't know existed. ( No I have no idea why Ed Brubaker's Criminal isn't listed.)
Posted by Nathan Cain at 7:17 PM No comments: 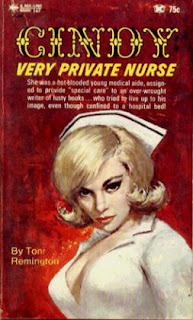 Hello Nurse
Posted by Nathan Cain at 6:04 AM 2 comments:

Review of Die With Me

Die With Me (Macadam Cage, 2007), by first time novelist Elena Forbes, is a competent, but hardly compelling, thriller. It focuses on detective Mark Tartaglia’s search for a killer who seduces young girls over the Internet and then tosses them from high places. If this were all Tartaglia had to deal with it would be enough, but his boss and best friend is in a coma after a motorcycle accident and the woman brought in to replace him rubs him the wrong way and she might have a stalker and his partner’s love life is unfulfilling and his sister wants him to come to Sunday dinner and he’s been sleeping with the coroner who neglected to tell him she had a boyfriend. One might be tempted to say that Tartaglia’s real problem is not the killer but the sheer number of needy women in his life. It’s a wonder he’s not the one chucking female members of the species off bridges.

Even if you just chalk up Tartaglia’s patience with what goes on around him to a preternatural tolerance for annoying, selfish women, it’s still too much. Forbes juggles too many subplots and too many points-of-view. She never does it poorly. It’s always easy to tell what’s going on and whose perspective is being presented, but it all takes away from the central plot. Despite repeated chapters presented from the killer’s point-of-view, the murder mystery almost feels like an afterthought. The result is that the killer, when he surfaces in the investigation, is easy to spot, unless the reader is just not paying attention. Forbes would have been well served to have spent more time cultivating suspects and leading her characters down convincing blind alleys than dwelling on their personal lives.

Forbes could have also crafted a more compelling villain. His motivations are textbook (he had a less than ideal childhood, don’t you know) and his choice of victims and method of killing are not exactly terrifying. Tossing Emo kids to their deaths might, in some circles, be considered a public service. The fact that Forbes ends her book with a setup for a sequel featuring the same killer, does not bode well for the next installment in the series.

Posted by Nathan Cain at 8:53 AM No comments: