Bringing Sexy Back: A Double Shot of Ray Banks 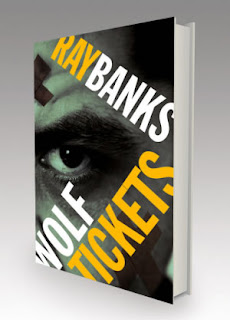 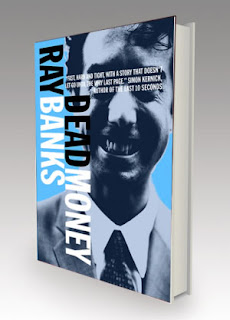 I can think of no better way to get this long moribund blog going again than with a double review of one of your favorite authors and mine, Ray Banks. Thanks to Allan Guthrie and his new Blasted Heath e-publishing company, Banks, last heard from finishing his Cal Innes quartet with Beast of Burden, has returned with two books, one old and one new. The first, Dead Money, is a reworking of The Big Blind, his debut novel about depraved double glazing window salesmen who don’t sell many windows, but do manage to get into a helluva lot of trouble. The second, Wolf Tickets, is a tight little shot of noir about two Army buddies who set out to find a woman who ripped one of them off and end up getting more than they bargained for.

Banks is a tight writer, and both of these books are short, sharp and right to the point, and their respective points are quite sharp. Dead Money is a sort of Glengarry Glen Ross without all the boring talking and focus on sales. Instead it focuses on the outside lives of two degenerates; Alan Slater and his even more despicable friend (at least to start with) Les Beale. Despite being a bit hazy on why Slater would hang out with Beale, who is a compulsive gambler, alcoholic and horrible racist, the story is strong. It focuses on Slater trying to juggle his job, his mistress, his loveless marriage, Beale’s problems and a couple of corpses, one human and one not. Considering how terrible our protagonist is, the book is funnier than it has any right to be, and Banks proves his skill with one scene in particular where Slater and Beale are trying to dispose of a corpse. It is both horrifying and hilarious. Not an easy task to pull off.

The story is ultimately one of delusion and unraveling, and Banks keeps it coming, pacing it well, making sure that, as he peels back the layers or Slater’s twisted personality that he never reveals too much too soon. By the time you get to the end, you’ll be laughing along with Slater, but not for the reasons Slater is laughing.

Wolf Tickets finds Banks up to his old narrative tricks, using dueling first person narration to tell a story, and what a story it is. No frills, no bullshit, just straight up action. This is the least reflective work by Banks that I have read, and I think the only thing I haven’t gotten around to yet is his novella California. It’s a deceptively simple story, seemingly straightforward at first, but Banks, ever the skillful storyteller, gradually complicates things, peeling back layers, getting at the truth, until you end up with something totally unexpected.

On the surface it’s about the Irish Farrell looking up his old English buddy Cobb to help him track down his girlfriend Nora, who has run off with a substantial sum of money, a small amount of blow, and, most importantly, Farrell’s favorite jacket. The story is a straightforward one of revenge, but the real fun comes from how the two characters see each other. The chapters alternate perspectives, giving the reader insight into how these two friends really see each other, adding a layer of complexity to what would otherwise be a slight story. As with Dead Money, Banks proves deft at doling out insight in just the right amounts, complicating what he presents to the reader as rather straightforward characters. By the end you’ve been spun 180 degrees with such deftness that you didn’t even notice it. A surprising, violent, and strangely uplifting ode to friendship, Wolf Tickets is not to be missed.