I am back from a much deserved four-day weekend. Even a little time off from routine does wonders for one's outlook. The blog will be back to full speed soon. Until then, there's the latest issue of Storyglossia, edited by Anthony Neil Smith and featuring stories by Ray Banks, Megan Abbot, Seth Harwood, Fred Zackel and others. Well worth checking out.
Posted by Nathan Cain at 8:17 PM No comments:

The DIY Ethic Pays Off

Seth Harwood, who has been tirelessly promoting his print-on-demand debut Jack Wakes Up, has just sold the book to Crown/Random House for publication as a trade paperback in 2009. He also somehow managed to get into the SF Chronicle twice in one week. Yeah. Two articles about his work in a top tier newspaper in one week. That sound you hear in the distance is the rage filled sobbing of overpaid publicists in New York as they weep bitter tears of jealousy over not being able to get that kind of press for their clients.
Posted by Nathan Cain at 6:03 PM 1 comment:

Author Bill Crider rated an Edgard nomination for his contribution to Busted Flush Press's 2007 anthology Damn Near Dead. Now, BFP publisher David Thompson has posted Crider's story "Cranked" on the Web for all to read.
Posted by Nathan Cain at 6:33 PM No comments: The first incarnation of this book.
Posted by Nathan Cain at 4:54 PM 1 comment:

An example of poor marketing 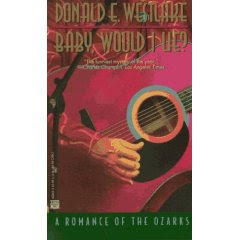 First off, let me say I feel like I have been slacking lately when it comes to the blog. In truth, I've been in a funk, and, even though I have a lot of good books lying around, I've been having a hard time starting them, and when I do start them, I have a hard time finishing them. It's not the books, it's me. I'm tired, and I need a break. Fortunately, I've got a little time off from work coming up, which will, hopefully, recharge me.

Anyway, this weekend I ran across a copy of Donald Westlake's Baby, Would I Lie? while browsing at one of my neighborhood used bookstores. The cover shows a guy with a bolo tie and an acoustic guitar and bears the subtitle "A Romance of the Ozarks." My initial reaction was to put it back on the shelf. Romance? The Ozarks? Could it get any more unappealing? Fortunately, I read the inside flap and found out it was actually a sequel to Westlake's comic tabloid journalism novel Trust Me On This. True, it was set in Branson, Missouri, which is in the Ozarks, but it was definitely not a romance. I'm not sure who was in charge of coming up with the subtitle, but they could have at least read the damn book first.
Posted by Nathan Cain at 7:09 PM 1 comment: 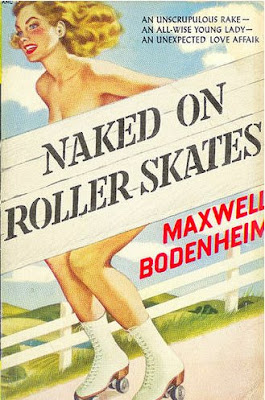 She should at least have a helmet. (From the Hangfire Books Flickr Stream). Special thanks to J. Kingston Pierce for sending the image along.
Posted by Nathan Cain at 8:00 AM 1 comment:

Hard Case Crime has reached back into the past and borrowed a trick from Ace paperbacks with its latest release, the double entry Shooting Star/Spiderweb by Psycho author Robert Bloch. Both novels were originally published as Ace doubles, although not together.

While Bloch is best known for his horror fiction, he wrote in many genres, including crime fiction. The pairing of these two books may offer some insight into why Bloch’s horror novels are the ones for which he is famous. Shooting Star, is a straightforward private eye story, while Spiderweb, a dark crawl through the sewers of , which could just as easily be called horror as it could crime, and it is the superior of the two.

Shooting Star features down and our literary agent and part-time private eye Mark Clayburn who is hired to investigate the six month old murder of B movie star Dick Ryan, whose reputation was sullied by the fact that he was found dead with marijuana in his trailer. Clayburn takes the case, and there is a long list of degenerate type suspects, but the killer’s identity is obvious almost from the beginning. Shooting Star is not a bad book, but there is nothing to distinguish it from the many other similar PI novels of the paperback era.

Spiderweb tells the story of Eddie Haines, a radio presenter from the Midwest who moves to to make it big, only to end up working cons as phony self-help guru under the tutelage of the satanic Professor Otto von Hermann. At first Haines is grateful to have the gig, but eventually comes into conflict with the good doctor and himself, as he struggles to maintain his original identity and avoid being consumed by the false front the doctor has created for him. Unlike Shooting Star, Spiderweb is remarkable for its darkness and the complexity of his main character and the situation in which he finds himself. Bloch does a masterful job of invoking hellish imagery and creating a demonic patina on Hermann. The result is an unflattering portrait of southern in the Fifties that shows that the more things change the more they stay the same.

Posted by Nathan Cain at 6:30 PM No comments: 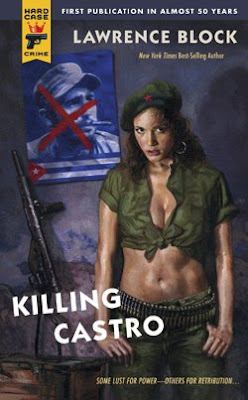 Hard Case has announced it's first title of 2009-Killing Castro by Lawrence Block. Yet another of Block's early pseudonymous efforts, they're billing it as his rarest book, written under a name he only used once.

And over in Brooklyn, Akashic has returned its city themed noir anthology series to Brooklyn for a third outing with a true crime twist.

Posted by Nathan Cain at 8:07 PM No comments: 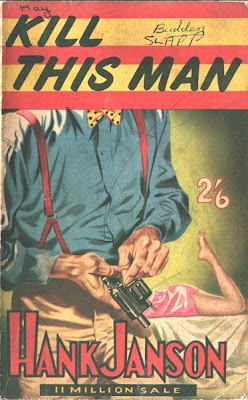 Hank Janson seems to have been England's Mickey Spillane.
Posted by Nathan Cain at 7:00 AM No comments:

I was doing a little surfing, looking for something interesting for the Wednesday paperback cover, and I ran across Crimeculture, a site that features academic articles on crime fiction. It's been around a while, so it's probably old news to most of you, but I somehow managed to miss it entirely. It has articles on many topics, ranging from the cultural significance of paperback postwar American crime fiction to Paul Auster's New York trilogy. This promises to be interesting.
Posted by Nathan Cain at 6:41 PM No comments:

For those of you who, like me, could not make it to Noircon this year, you can listen to Shannon Clute and Richard Edwards podcast from the conference here. Hopefully, I will make it next year. This year, however, I will have to sit here and listen to the interviews.
Posted by Nathan Cain at 5:56 PM No comments:


Al Guthrie has a rather tasteful trailer for his upcoming Savage Night. Tasteful is a relative term, of course, and there is talk of arse cheek slicing. I received a copy in the mail quite unexpectedly a while ago, and it seems like Guthrie's up to his old tricks. There's a scene with a mentally ill woman with a full adult diaper and her husband that's more disturbing than anything in Hard Man, but I still have every intention of finishing the novel, which should tell you something.
Posted by Nathan Cain at 7:50 PM No comments: 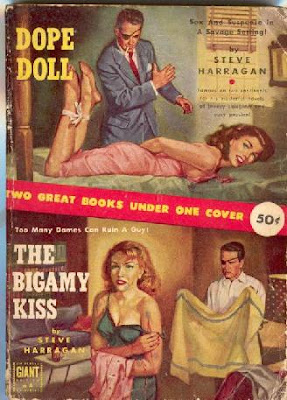 Ace wasn't the only publisher to do doubles.
Posted by Nathan Cain at 7:00 AM No comments: