Review of Songs of Innocence 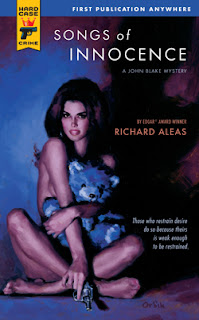 The private investigator is seldom an integral part of a detective story. He serves as a catalyst, stirring up other characters and prompting them to act, but never has any personal stake in the action. If the detective didn’t stir things up, someone else would. Sure, Lew Archer liked some characters more than others, and he even liked one enough to sleep with, but much of the time Archer is almost invisible, and even when he isn’t, the terrible secrets he uncovers never affect him personally. It’s always someone else’s life falling apart.

With private investigator John Blake, Richard Aleas (aka Charles Ardai), has made it personal. Blake’s first outing, the Edgar nominated Little Girl Lost, had him trying to find out who killed his high school girlfriend on the roof of a strip club. The sequel, Songs of Innocence (Hard Case Crime, 2007), finds Blake retired from sleuthing and deeply emotionally scarred by what he found during his search for Miranda Sugarman’s killer. He finds himself attracted to a woman who is his equal in the emotional baggage department.

Dorothy Burke ran away from an unhappy childhood, and straight into an unhappy adulthood. She earns living jerking men off and she hates herself for it. She and Blake form their own two person support group, telling each other the dark secrets they would never tell anyone else. They have an agreement to call each other when they’re thinking about suicide. When Blake finds Dorothy dead in her bathtub with a plastic bag over her head and a copy of Final Exit nearby he’s hurt. She didn’t call. Blake is convinced someone killed Dorothy, and he is soon sucked into New York City’s sex trade, trying to find out the truth.

As he gets closer to the truth, however, the already fragile Blake begins to fall apart. He is beaten up, threatened, chased and framed for murder. It’s more than he can handle. In the end, Songs of Innocence is a portrait of mental disintegration as much as it is a detective story. Blake’s descent is what sets the story apart from others in the genre. In Blake, Aleas blends the self-destructive streak found in protagonists of noir masters like Goodis and Cain with the relentless drive to uncover the hidden that motivates the likes of Marlowe and Archer.

The detective aspects are competent, with the right revelations in the right places, leading to the uncovering of a secret that would fit nicely into a Ross MacDonald novel. No one familiar with PI tales will be shocked by the final secret. It’s the denouement that will shock. Aleas makes a bold move at the end of the book, one that is probably unprecedented in a private eye novel. It won’t sit well with many readers, but ultimately it makes sense.

My first intro to the hardcase was this one and I loved it. The ending was a bit...err, morbid, but I really got into it and I suppose it was the only way.