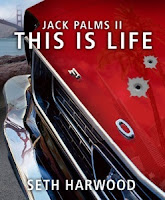 Podcaster and novelist Seth Harwood was in town last week, and he took the time to sit down and talk a little about his work. Seth is currently in the middle of podcasting his second novel, This is Life, featuring washed up actor Jack Palms. He has podcasted Jacks first adventure, Jack Wakes Up, which will see print in March from Breakneck Books. He's also podcasted a collection of non-crime short stories called A Long Way from Disney.

What made you decide to go the podcast route, as opposed to what David Wellington did with putting his horror novels up on the ‘net?

I got really interested in the net about a year and a half ago. So first it was all about short stories for me. I published like a dozen short stories in small literary journals. They’re not crime, and it’s like I get my two copies and tell my friends about it and they say great, but no one can ever read it because no one can find it. There’s no distribution with them. Then I got a story accepted by this online place and all of a sudden everyone was reading it, and I could tell my friends go to this site and read it and I was getting a lot of feedback from that, so I got the idea to start my Web site and put my stuff there, and I wanted to put Jack Wakes Up there. When I started thinking about that I was in , where I’m from originally, and one guy said I should do a podcast, and he connected me with Scott Sigler, who is huge in podcasting, and Scott basically walked me through how to get it started. I don’t know how did it, but it seemed to me like it was easier to get people to listen to a podcast right of the bat, than to read my stuff online.

What made you want to move into genre fiction, as opposed to staying with the short fiction?

Jack Wakes Up is getting published. How did that work? Did the publisher come to you? Were you shopping it around while you were podcasting? How did that come about?

I've been shopping this book around before, during and after I podcast it. My initial idea was that someone (an agent or an editor) would appreciate this initiative and my audience when I told them about it in a cover letter. That never happened. Bascially, I've come to see that they want something they can trust--an Amazon sales rank is what they feel they can trust. As a result of this, having the book published and selling it becomes a necessary part of marketing it. Seems odd, but what you're really marketing is yourself as a writer and a "brand." So be it. With that in mind, I started contacting smaller publishers, knowing that my own marketing through the podcast would be what sold the book anyway.

Luckily, Jeremy Robinson of Breakneck Books, a guru and a veteran of online independent publishing, realized that the audience I've created can translate immediately to selling books. Now we're working together: he's doing all the book-side stuff that I don't know about and I'm rolling out the podcast audience promotion. The listeners have already named the plan: it's called "Shake 'Em Down on Amazon.com!" after Jack Palms' fictitious big action movie, Shake 'Em Down. And with Jack Palms being the protagonist, there's no better day for the book to come out than Palm(s) Sunday!

How involved are fans of your podcast?

All my artwork is from my fans. Most of my cool marketing ideas come from my fans. Some of the fans are doing voices on the podcast. That’s another cool thing about podcasting. There’s so much back and forth with them (fans). The relationship with the fans is one of the best things about it (podcasting).

Do you write from an outline?

No. I’m a big believer in a lot of your best writing and material development coming from your subconscious. Whatever you know in your conscious mind there’s other stuff that’s back there and you just have to write it. You have to be writing to access that stuff. If you’re writing you can pull it out of there and it becomes the story. To me it seems like writing is an exploration, and often for me the most exciting stuff that happens are the things I don’t predict. The most exciting days are the days where I sit down and something completely blows me away and surprises me, and I have to stop writng and be like, ‘can this really happen? Am I okay with this? Can I deal with working this in?’ And those things often end up being some of the best stuff.

Talk about Jack a little bit. Where did he come from?

Have you ever seen The Transporter? It's a bad movie right? But here was this guy (Jason Statham) who I had only seen in this serious movie (Guy Ritchie's Snatch) where he was a funny character gets into this movie and kicks the shit out of hundreds and hundreds of guys. To me that seemed utterly ridiculous, and I was like ‘What would happen if a guy who was just a normal actor was in this movie and did huge amounts of ass kicking. What would happen to his life is he was suddenly perceived as this big ass kicker, and he wasn’t doing acting anymore and he had to deal with people on the street.

Who are your influences?

People like Elmore Leonard and Robert Parker. A lot of my early crime influences are people I would listen to. I’ve never read an Elmore Leonard book, but I would listen to them on tape in the car. A lot of my early influences came about from listening to them in the car, and now I’m doing podcasts. It’s sort of come full circle. When I was growing up I read a lot of Michael Connelly. I read a lot of comic books. Stephen King. Now, I’m into and Lawrence Block.

Seth is clearly a leader in the podcast fiction field, and he learns fast. JACK WAKES UP will be on the big screen (or the way things are going, on the small-small computer screen for a global release) in the next five years. Bottom line, it's a great story.

Great interview, Seth! I didn't realize that Scott 'taught' you podcasting. It's almost like an infection, huh? He's right, JACK WAKES UP is a great story and there's no telling how far it will go.

Nathan, I like your concept and look forward to reading more in the future. Thanks.