Review of The Big O 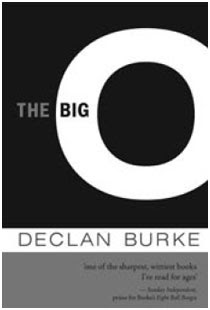 Declan Burke’s second novel, The Big O (Hag’s Head Press, 2007), is a comic crime caper that is delivered in short bursts with an emphasis on snappy dialogue. It tells the story of Karen and Ray, who meet when Ray happens to walk into a store Karen is busy robbing. Ray’s more curious than put off, and he asks her out for a drink. He tells her up front that he works kidnapping people and painting murals, although not at the same time.

Burke goes on to introduce other characters, including Frank, a pathetic plastic surgeon and Karen’s boss, and Madge, Frank’s soon to be ex-wife and Karen’s best friend. There’s also Rossi, Karen’s ex and an ex-con, a cop named Doyle and a wolf. With the story told from many different points-of-view, there is the real potential for confusion. Burke handles it well, though. A reader can’t help but be a little confused at the beginning, but the feeling doesn’t last too long. Burke gets setup out of the way in short order.

The book’s plot hinges on a lot of coincidences, but it’s not too difficult to suspend disbelief. The characters are sharply drawn, and Burke keeps thing short, never letting any one scene drag out too long. The real treat in The Big O, is the dialogue, though. Burke has a knack for sharp banter, and it is a rare chapter that doesn’t have a witty exchange between characters.

The Big O has flaws, but Burke is an up and comer. He’s recently made the jump across the Atlantic, landing at Harcourt, the home of Allan Guthrie and Ray Banks. It’s clear that he’s a writer who deserves a wider audience, and will soon have a well-deserved shot at the big time.