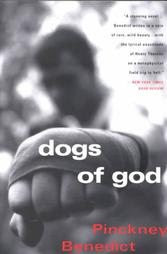 Pinckney Benedict is not a prolific author. He's published a couple collections of short stories, but only one novel. Dogs of God, published in 1994, is a backwoods apocalypse. Set in the mountains of West Virginia, it revolves around two main characters: Tannhauser, a 12-fingered drug lord who imports illegal immigrants to use as slave labor on his marijuana plantation and Goody, a bare-knuckle brawler who makes his living fighting in honky-tonks. There is a large cast of supporting characters, including corrupt lawmen, a hermit and drug smugglers. For much of the novel, the characters go about their brutal business, but their paths gradually converge, and when they do the result is a conflagration so great that those lucky enough to survive come out scarred beyond recognition.
Benedict, a native West Virginian, uses his Appalachian setting to the fullest, and his depiction of men (and it is a book about men, not women) forging a hellish new society in a lawless wilderness gives us a view of human nature as bleak as that in Conrad's Heart of Darkness or Golding's Lord of the Flies. Men in their natural state, are little different from the insanely destructive wild hogs that populate the woods around them. They have the same animal urges, for sex, for blood, and they act on them without thought or consequence. Even Goody, the moral center of the book, is a fighter. He works beating men bloody in bars for cash. The only difference between Goody and the murderous drug runners is that his fights have rules, nebulous as they may be.

The book's climax is an apocalypse, in the true sense of the word, a "lifting of the veil," for Goody, who, after killing one of Tannhauser's lieutenants in a prearranged bar fight, end up on the plantation just as the shit hits the fan. He ends up, well, I won't spoil it for you, but suffice to say he emerges from the experience with a terrible revelation on his lips. Dogs of God is steeped in rural culture and old time religion, and Benedict's characters are the type of creations Flannery O'Connor would have dreamed up had she ended up with a Y chromosone instead of two X's.

(Thanks to Patti Abbot for the invitation to contribute)
Posted by Nathan Cain at 7:10 AM

Sounds like a dandy, Nathan. Thanks for coming up with it.

Good review... I'm wondering what the terrible revelation is. Definitely sounds worth checking out.