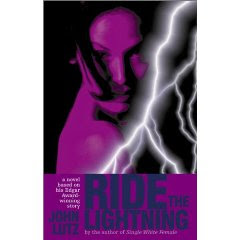 John Lutz, for better or for worse, is best known as the guy who penned SWF Seeks Same, which Hollywood turned into the Bridget Fonda vehicle Single White Female. He's done a lot more than that, though. His Wikipedia entry lists three series of books, thirteen stand alones and more short stories than I can be bothered to count. It was Lutz's short story from The Black Lizard Anthology of Crime Fiction that first got my attention, so when I ran across his novel Ride The Lightning in a used book store, I snatched it up.

Ride the Lightning is one of Lutz's Alo Nudger books. It's based on an Edgar winning short story, which originally appeared in Alfred Hitchcock's Mystery Magazine in 1985. The perpetully down-on-his-luck Texas PI is hired by a white trash sweetheart to prove that her boyfriend, who is sitting on death row for killing a convenience store clerk during a robbery is innocent. Nudger knows the case is hopeless, but he takes it anyway. He needs the money. Of course, once Nudger starts poking around, he finds things aren't as cut and dried as they seem.

Ride the Lightning confirms my initial impression of Lutz as an excellent writer. You can add him to the list along with writers like Ed Gorman and James Reasoner who are criminially underrrated and unknown while people who murder the English language and the rules of good fiction make the bestseller lists. Ride the Lightning, and I suspect the rest of Lutz's work, are well worth your time.
Posted by Nathan Cain at 6:00 AM