The Colorado Kid gets turned into something it's not 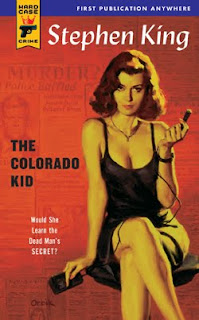 Stephen King's supremely shitty entry in the Hard Case Crime lineup has been optioned for a television show for the Syfy (I, know, I know, Syfy. Was there something wrong with Sci-Fi?) network for a TV show called Haven. Here's the show's description:

Syfy's all-new one-hour drama series Haven, starring Emily Rose (Jericho, Brothers and Sisters) is based on the novella The Colorado Kid from renowned author Stephen King. The series follows the shrewd and confident FBI agent Audrey Parker (Rose) who has a lost past, and arrives in the small town of Haven, Maine on a routine case. Before long, her natural curiosity lands her in the epicenter of activity in this curious enclave, which turns out to be a longtime refuge for people that are affected by a range of supernatural afflictions.

As the townspeople's dormant abilities begin to express themselves, Audrey helps keep these forces at bay while discovering the many secrets of Haven — including one surrounding her own surprising connections to this extraordinary place.

Now here's the description of The Colorado Kid:

On an island off the coast of Maine, a man is found dead. There’s no identification on the body. Only the dogged work of a pair of local newspapermen and a graduate student in forensics turns up any clues, and it’s more than a year before the man is identified.

And that’s just the beginning of the mystery. Because the more they learn about the man and the baffling circumstances of his death, the less they understand. Was it an impossible crime? Or something stranger still...?

No one but Stephen King could tell this story about the darkness at the heart of the unknown and our compulsion to investigate the unexplained. With echoes of Dashiell Hammett’s The Maltese Falcon and the work of Graham Greene, one of the world’s great storytellers presents a moving and surprising tale whose subject is nothing less than the nature of mystery itself...

Do these two descriptions even seem remotely similar? Call me cynical, but it seems like someone bought the only Stephen King novel not under option just so they could put his name on a new series in hopes of getting people to watch it.

Call me when someone options Money Shot for a television show. I'd watch that.

Labels: Hard Case Crime, Stephen King, Who the fuck do you think you're kidding