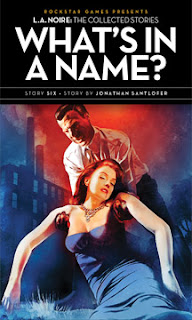 I realize anyone who has followed this blog in the past has probably assumed that I ended up dead in a ditch somewhere long ago, but the truth is much, much worse. It's work. It turns out that writing all day for other people kind of makes logging onto a blog and writing at the end of a long day unappealing. And when I do have good intentions in that regard, I end up falling asleep on the couch or something. I have books I'm working on reading, I promise, but right now it's a slog. Reading is an activity that requires a certain level of alertness and concentration that I've been lacking, and I'm not going to review anyone's work unless I can give it the full attention it deserves.

So, let's start out with something a little more mindless: video games, specifically L.A. Noire. I bought a copy the day it came out, which I have never done for a video game before, but after seeing the previews and reading the reviews I realized it was as if a group of people had sat around and asked themselves "What kind of game would Nathan like to play?" Maybe they did. Maybe they broke into my apartment and realized I like fedoras and murders and adventure games and horrible crimes that expose the sordid underbelly of city life. Maybe.

Anyway, the game, so far is good. Not that I've had much time to play it. Hopefully, I'll be able to say more about it soon. In the meantime, enjoy these stories from a who's who of writers. And check out Charles Ardai's intro to the L.A. Noir short story anthology on BoingBoing. I'm glad to see the world of video games and literature coming together like this. They are, after all, both forms of storytelling, and there's no reason they can't complement one another. And, who knows, maybe these stories will lead video gamers to pick up a Hard Case Crime novel, or a James Ellroy book and see what they've been missing.
Posted by Nathan Cain at 10:47 AM