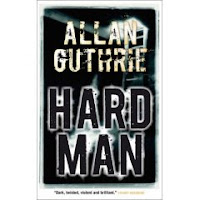 Allan Guthrie’s latest offering, Hard Man (Polygon, 2007), is a kick in the teeth. A novel about what it means to be tough, its unflinching depiction of violence is both its greatest strength and greatest weakness.
Hard Man reintroduces Pearce, the unlucky thug who first appeared in Two Way Split, having been released from prison just in time to watch his mother get murdered in a botched post office robbery. Pearce has settled down, bought an apartment, and gotten a dog, which he has named after his mother, even though it is male.
Pearce is drifting through life, with no particular plans, when he is approached by the highly dysfunctional Baxter clan, who want him to protect their youngest member, 16 year-old May, from her husband Wallace, who has found out that the child she is carrying belongs to another man. Pearce declines to tackle Wallace, but later changes his mind when his dog disappears and Wallace is the prime suspect.
Hard Man starts out pretty tame, but once it get going it builds momentum until it goes off the rails. In that way, it resembles a Jacobean drama and, like those dramas, its greatest weakness is its unrestrained violence. At this story’s heart is an abrupt turn that rivals the final chapters of Jim Thompson’s The Getaway for sheer ugliness. The sudden shift in tone and direction is unsettling, and the act of violence that triggers it cries out for more explanation. It is not giving away too much to say that Wallace is the perpetrator, and that, while he does seem like a hard man, he never comes off as being the sort of stone crazy lunatic who is capable of doing what he does. Guthrie shifts point of view, offering the reader glimpse into the heads of each character, but the glimpses afforded into Wallace’s mindset are not enough to fully explain his actions. The more terrible an act of violence the more context it requires, and Guthrie should have let the reader spend more time with Wallace.
While one character’s motives may fall short, Guthrie’s storytelling abilities are in full effect. Unlike his second novel, Kiss Her Goodbye, there is no whodunit element, and the plot barrels along at a breakneck pace, especially for the final third of the book, where there is enough violence and dark humor to satisfy every crime fiction fan. Once Guthrie hits his stride it's over. There's no going back.
The sadism in this story will be disconcerting to all, and may be a deal breaker for those with more sensitive constitutions, but Hard Man is like a gory car crash. You look at the carnage. You look away, filled with horror. Then you look again. You can’t help it.
Posted by Nathan Cain at 7:35 AM