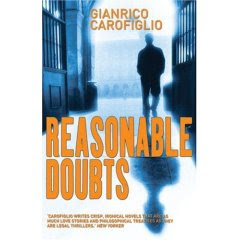 Reasonable Doubts (Bitter Lemon Press, 2007) by Gianrico Carofiglio and translated by Howard Curtis, is a thinking man’s legal thriller. The third novel to feature defense lawyer Guido Guerrieri, Reasonable Doubts centers on Guerrieri’s efforts to clear a man convicted of drug trafficking after having been caught entering Italy with a car packed full of cocaine. Complicating matters is the fact that Guerrieri’s new client may or may not be a former fascist thug who once beat up his new lawyer for wearing the wrong color coat, and the fact that Guerrieri finds himself hopelessly smitten with his new client’s wife. His client, called Fabio Rayban, because of the brand of sunglasses he used to favor, might also be guilty.

Carofiglio, a former mafia prosecutor in , where he sets his novels, does not provide any easy answers. The legal system renders verdicts, either guilty or not guilty, but the legal system is just a social construct set up to help people deal with complex sets of facts, and, even after a verdict is rendered, questions about the truth often remain. The author’s background and experience help him paint a vivid picture of the ambiguous nature of much legal work.

The book is slow at points, however, and may be a bit underwhelming for readers whose tastes run to two-fisted action or sensational crimes. It’s truly a novel of the legal system, and most of the action takes place in offices and courtrooms. The denouement is also a little too convenient. The protagonist, after having brought unwanted attention to some organized crime elements while trying to clear his client, has all of the impending danger disappear through a stroke of coincidence. After a long story about how easy answers aren’t easy to come by, the ending is a little too convenient, but then again, it’s fiction, and if we are to be denied easy answers in real life, shouldn’t we be able to find them somewhere?