Reviews of Kill Clock and The Killer 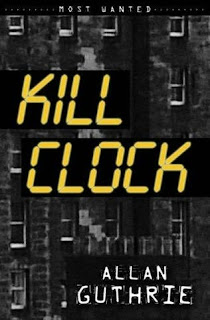 Allan Guthrie’s latest offering, Kill Clock, (Barrington Stoke, 2007) is an adult story written so children could read it. The simplicity of style is intentional, as Barrington Stoke is a publishing house devoted to putting out books for reluctant readers. Billed as a novella, Kill Clock takes less time to read than many short stories written for less-than-reluctant readers.

The story follows thug, Pearce, from Two-Way Split and Hard Man as he tries to rescue his former fiancée from a local loan shark. Pearce is, as usual, reluctant to get involved. When his ex, Julie, shows up with a story about how her newly dead husband owed a lot of money, and she has to pay it back or be killed, he thinks she’s putting him on. After all, she ran off with the engagement ring he gave her years ago. Even after Julie is kidnapped in front of him, and her two children, Pearce is still skeptical about her story, but he feels he has no choice but to get involved because of Julie’s kids.

Kill Clock moves quickly, but it’s such a short story that it has to. It takes place after the events of Hard Man, but they are alluded to only in a vague way. The lack of background is understandable because of the nature of the writing Guthrie is doing, but Pearce is becoming problematic. He’s been through a lot. He found his sister dead of a drug overdose. His mother bled to death in his arms, and he watched a man get crucified. Through it all, he has remained the same hard headed tough guy. It’s beginning to stretch credulity. If Guthrie is going to carry on with Pearce, as seems likely, the character is going to have to grow and change to stay viable. In Kill Clock there are hints that Pearce may take. Hopefully, Guthrie will expand on those hints the next time he brings his fans another Pearce story.

(Archaia Studio Press, 2007) by writer Matz and artist Luc Jacamon, is a not terribly original story about a hitman who is struggling to stay sane while he tries to retire in peace. Crime fiction is full of hitmen who suffer existential crises and try to get out of the business only to find out it’s not easy to quit. The Killer would be boring if it weren’t a graphic novel. Comic books have a tendency to be over the top, which is only natural given that most of the characters in comics wear tights and have superpowers. It’s an over the top premise. The problem comes when comic artists and writers try to tell a story that should be done in a realistic fashion, but can’t leave the visual and verbal hyperbole behind. The Killer doesn’t have that problem. It’s subdued in it’s presentation, for a comic book. The title character isn’t some sort of super killing machine. He’s a man. A lonely man, and the violence, while graphic isn’t over the top. Aside from Ed Brubaker’s Criminal series, there isn’t a lot of crime fiction being published in graphic novel format these days, and for that reason, The Killer is a welcome volume.

If you're interested in The Killer, be sure to check out the online Flash version of the comic book, here.