Review of The Chinaman 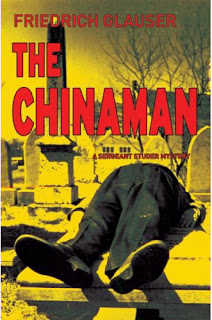 There is not much in English about Swiss author Friedrich Glauser. Until Bitter Lemon Press started translating his Sergeant Studer novels a few years ago, he was more or less unknown in the English speaking world, despite having a major crime fiction prize named after him in . What little information is available about him is intriguing. He was a morphine addict, and perhaps a schizophrenic, who spent a good portion of his life in prison and asylums. In fact, he started his writing career while in an asylum. The latest novel to be translated into English by Mike Mitchell is The Chinaman (Bitter Lemon Press, 2008). The fourth of the Studer novels, The Chinaman finds Studer trying to solve the murder of the titular character, James Farny, who is not Chinese, but Swiss. Studer gives him the nickname after seeing his slanted eyes.

Studer meets Farny by chance one night when his motorcycle runs out of gas, and he has to stop at an inn to get more gas. Farny tells Studer that he fears he will be murdered and, four months later he is found shot to death on the grave of the recently deceased wife of the village poorhouse’s warden. Some think it is a suicide, but Studer knows better and sets out to find the culprit.

The novel itself is a cross between Agatha Christie and CSI. Using primitive forensic investigation techniques, Studer uncovers not one, but two murders and tries to winnow down a long suspect list. When Studer does unmask the culprits, he does so in a fashion befitting Poiroit or Nero Wolfe. The story itself is not exceptional, but the author’s anger is. As befitting someone who spent a good deal of his life hounded by the authorities for the victimless crime of self-medicating, Glauser has a strong libertarian streak which is evident in his writing. In The Chinaman his wrath is largely focused on the way the poor are rounded up and warehoused in poorhouses. The most contemptible character in the novel is the poorhouse warden, who will spout off to anyone who will listen about the intractable problem of “pauperism.” The flipside is Ludwig Farny, nephew of the deceased and a poorhouse inmate, who, though poor, manages to be intelligent, honest and noble. While this is, in may ways, a drawing room mystery, complete with all the suspects brought together for the climax, it’s not every drawing room mystery that contains a call to smash the state.

Glauser has been Bitter Lemon's greatest gift to the English-reading world, and that's saying a lot. They've published some good stuff. But Glauser is the best, possibly the greatest crime-fiction writer who has ever lived, an unparalleled combination of sympathy, anger, humor and mystery.

He's like Simenon with more of an edge and a better sense of humor.
==============
Detectives Beyond Borders
"Because Murder Is More Fun Away From Home"
http://www.detectivesbeyondborders.blogspot.com/