Review of A Diet of Treacle 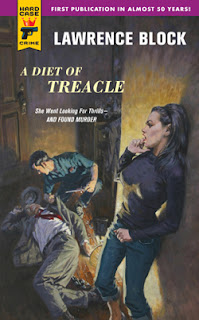 A Diet of Treacle (Hard Case Crime, 2007), by Lawrence Block is not exactly a lost classic, but it is an enjoyable read. Originally published pseudonymously under the execrable title Pads are for Passion, the novel was originally marketed as a sleaze paperback, promising to lay bare the dark heart of decadent Greenwich Village for people whose experience with was probably limited to layovers at LaGuardia.

The story follows Korean War vet and dropout Joe Milani and Anita Carbone, a good girl from uptown, who comes to the Village looking for excitement, as they try to get their lives together. This would be a rather simple task were in not for Joe’s roommate and best friend Shank, who deals weed. When Shank’s connection gets busted, he goes looking for a new one. His new connection wants Shank to push heroin, however, and that’s when things get complicated.

The plot, such as it is, is remarkably spare, and there is a lot of telling instead of showing to flesh out the characters’ backgrounds. Still, Block, even in his early days, was a talented storyteller, and the book is an effortless read. For a book that was supposed to be titillating, it is remarkably tame. One minor character is coyly described as a virgin, but it is made clear that she enjoys some sort of intercourse. Apparently, to go into any more detail would be too scandalous even for an early Sixties sleaze novel.

While A Diet of Treacle does not rise to the level of Block’s later work, it moves so quickly a reader will hardly notice the book’s flaws. Even as a journeyman writer Block had a light touch and a gift for narrative that make even his lesser efforts worth a look.