Review of Made in Miami 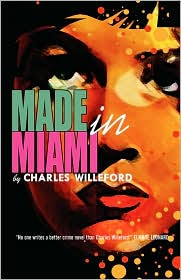 Made in Miami by Charles Willeford (Point Blank, 2008) is not a lost masterpiece on the order of The Black Mass of Brother Springer or Cockfighter. It is, however, a valuable contribution to the body of Willeford’s in-print work and shows that even when Willeford was not mining his signature themes of obsession and maintaining artistic integrity in the face of an indifferent world as deeply as he could, he still managed to keep them in mind and in print.

In an article that first appeared in First, the Book Collector’s Magazine, and is currently reprinted on his Web site, Don Herron writes that someone at Beacon, Willeford’s publisher at the time, suggested he imitate prolific author Orrie Hitt. Hitt wrote hundreds of novels and exactly none of them are in print today. The man doesn’t even rate a Wikipedia entry, which is a sure sign of being completely forgotten.

Hitt's influence is present in this novel, though, which is unfortunate. Originally published under the title, Lust is a Woman, Made in Miami, is probably as close to an actual sleaze novel as anything Willeford ever published. Willeford spent his early career writing for publishers who catered to men’s prurient interests, but his books were never about sex. He managed to put into print books that were more likely to get blood flowing to the brain than they were to points south.

Made is largely about sex, though. It’s a simple boy meets girl, boy loses girl to pimp, boy loses it when girl starts turning tricks story, but even when Willeford is off, he’s on. While the book does not mine any of Willeford’s signature themes very deeply, Willeford was also unable to suppress his literary instincts entirely and there are still flashes of brilliance, as when Ralph Tone, the protagonist, an art student and hotel elevator operator, laments that he will “never be the artist [he] wanted to be, following [his] own ideas, wrong or right.” At that point it’s almost as if the author is talking to himself, wondering what he’s doing trying to write like Hitt. It is fortunate that Willeford did not that suggestion too much to heart.