Review of The Vampire of Ropraz 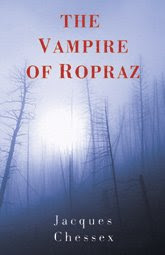 Jacques Chessex’s The Vampire of Ropraz (Bitter Lemon Press, 2008) is a disturbing tale made even more unsettling by the author’s minimalist approach to his material. Chessex takes as his starting point a true story of necrophilia and savagery that occurred in the Swedish in the early Twentieth Century and spins a spare, but powerful story.

A young girl dies and is buried. Days later, her corpse is found after having been dug up, violated and mutilated. After that, paranoia spreads throughout the countryside as the authorities scramble to find the perpetrator. Another girl’s corpse is found, and the paranoia mounts. Eventually, suspicion falls on Fevez, an alcoholic stable boy with a penchant for molesting cows. While Fevez is clearly disturbed, his guilt in the matter at hand is far from clear. Nevertheless, he is judged guilty and ends up in a psychiatric hospital, where he stays for decades before simply walking away one day.

Vampire, translated from French by W. Donald Wilson, is a slim book, coming in at around 100 pages. Chessex tells the story of Fevez with admirable restraint, and his detached, almost reportorial tone makes the crimes involved in the story all the more horrific. The effect is unsettling because one can’t help but want the author to weigh in with some sort of disapproval when writing about necrophilia and bestiality, but Chessex refuses to condemn. Eventually, the reason for this authorial distance is revealed, as The Vampire of Ropraz is not a story about monstrous crimes, but a tale about the fungible nature of identity.