Review of The Wounded and The Slain 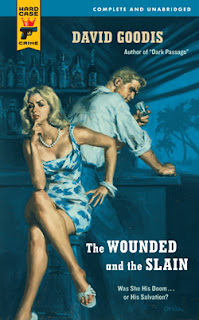 David Goodis couldn’t find a publisher today. His novel, The Wounded and The Slain, (Hard Case Crime, 2007) is a mess. The storylines don’t run together, the dialogue is sometimes stilted, and he relies heavily on internal monologues to advance the story. In this day and age, an agent or publisher would toss it on the slush pile and forget about it. It’s enough to make one wonder exactly what kind of novels are being passed on, because, despite all its faults, The Wounded and the Slain is an admirable piece of work.
The story focuses on James and Cora Bevan, a couple who have come to to try to revive their moribund relationship. Cora is frigid, and James is suicidal, wanting nothing more than to drink himself to death. Their vacation isn’t going well, and James finds himself wandering the slums of while Cora finds herself falling for another man. The situation goes from bad to worse when James kills a man in self defense while on a binge. To say more would give away too much, but suffice to say that Goodis created a storyline that drives James Bevan into the darkest recesses of his heart, and forces him to decide exactly what kind of man he is.
Cora’s storyline is another story. As the book opens, she is struggling with a buried trauma that makes her unable to respond to her husband’s advances, but also makes her uncontrollably attracted to certain other men. Any reader who can’t figure out what her terrible secret is the first time it comes up should be checked for a pulse. It doesn’t add much to the book, which is really about James.
Goodis’ habit of telling instead of showing can be annoying, especially since he can write a good scene. At his best, Goodis is cinematic. One scene where James Bevan stumbles blind drunk through a massive brawl that has broken out in a dive bar, is vivid and funny. It’s too bad Goodis doesn’t do it more often. A reader may find himself tempted to skip ahead a few pages when in the midst of one of the many extended internal monologues in which the characters engage.
Still, The Wounded and The Slain works because Goodis was such a good storyteller that the flaws in his writing don’t take away from the narrative, and sometimes provide a little bit of charm. Hard Case has found another winner for its growing list of reprints.