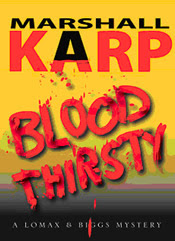 Bloodthirsty, (Macadam Cage, 2007) the second Lomax and Biggs novel from Marshall Karp, shows the author has learned from his mistakes.
Last year’s The Rabbit Factory was an enjoyable, but overly long thriller, where the author tried to throw in everything but the kitchen sink. The new outing featuring LAPD homicide detectives Mike Lomax and Terry Biggs is streamlined, with all the emphasis on keeping the plot rolling.
Lomax and Biggs are still basking in the notoriety they gained from solving their last case, and they sell the rights to the story to director Halsey Bates, who wants to get producer George Gerber to finance the film. When Gerber’s bloodless corpse turns up stuffed in a garbage can in the Hollywood Hills, Lomax and Biggs catch the case, and set out to find out who murdered one of the most hated men in Hollywood. When their prime suspect, an arrogant movie star, gets kidnapped and then turns up murdered in the same macabre fashion, the two detectives must scramble to prevent more murders.
While Bloodthirsty has none of the pacing problems of its predecessor, the plot is a little thin. Karp’s previous novel kept readers guessing until the end, the motives of the criminals in this book are transparent and what you see is what you get, which is disappointing, because part of the fun of a mystery is being in the dark, not just as to whodunit, but why it was done.
Still, with nothing to distract from the narrative’s motion, there’s no reason to put it down, and Karp’s clean prose makes for easy reading. Bloodthirsty will definitely satisfy fans of Karp’s detective duo and probably win them some new ones.
Posted by Nathan Cain at 9:15 AM