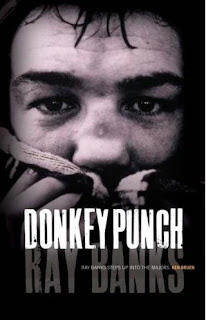 A good fighter doesn’t go for the knockout right away. He wears down his opponent’s defenses with jabs and body blows, waiting until the moment is right, and his opponent drops his guard. Then, boom. He unloads.
Such is Ray Banks’ technique in Donkey Punch (Polygon, 2007). The follow up to Saturday's Child finds former private investigator Callum Innes fresh off of probation and working at Paulo’s Lad’s Club, where troubled youths come to learn the art of boxing. Cal life isn’t all sunshine and flowers, however. He’s got an addiction to codeine, and Moe Tiernan is coming around the gym, selling dope and upsetting Paulo, who is convinced he can handle the situation. Cal isn’t so sure, which is why he is less than enthusiastic when Paulo asks him to accompany Liam, a promising young boxer with a temper, to America for a tournament.
Still, Cal gets on the plane, headed for Los Angeles, hoping for a vacation. What he finds isn’t palm trees and movie stars. Cal has to contend with Liam’s temper and a cast of characters who will do anything to make it in the brutal world of professional boxing.
Donkey Punch is a slow burner, a crime novel driven forward by characters more than plot. Banks takes his time setting up the big conflict, and when it comes, the reader will find that he cares about Cal, despite the fact that he often acts like a son-of-a-bitch. The same goes for the surly Liam, who turns out to be more level headed and mature than Cal.
While the characterization is good, the plot could unfold a little more smoothly. The motivations of Nelson, a former boxer who ends up being central to the novel, are a little unclear. Suffice to say he does something to Liam which will leave the reader puzzled. It’s not enough to throw the book off. In fact, it was only in retrospect that Nelson’s actions seemed strange. Banks is so deft at pulling the reader in that slight slips don’t matter much.
Banks’ style is no nonsense. There isn’t a wasted word, and his dialogue is sharp and direct. Those who haven’t read The Saturday Boy may find the backstory a little hard to follow at first, but it’s not confusing enough that it should discourage anyone from reading the book. Cal Innes is a character with staying power, and Banks is an author who knows when to unload.
Posted by Nathan Cain at 8:15 AM