Kiss Me, Stupid: What is Mickey Spillane's Appeal? 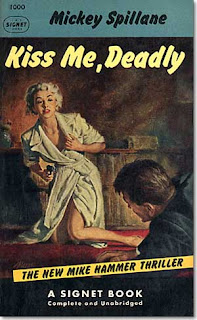 The recent arrival of Dead Street, the latest Hard Case Crime release, and the final crime novel by writer (not author) Mickey Spillane, has got me wondering, exactly what is the appeal of the man's work? I intended to write a review of Dead Street, but I don't think I'm going to be able to finish it. It's too corny. This isn't my first attempt at reading Spillane. I've tried a couple times before and always given up. I'm beginning to think it's him, not me. I posed a similar question on the mailing list Rara Avis, and no one has yet to offer a real defense of Spillane's work. There has been a lot of talk about how successful he was, and there's no arguing with that. He was a one man publishing phenomenon, and one of the most successful writers of the 20th Century. Still, he's not any good. His characters are all the same-psychopathic thugs. His dialogue is stilted and ridiculous (Was there ever a time when men called women doll?) and his plots don't exactly leave room for shades of gray. Violence is always the answer. In Spillane's world there's no problem that can't be solved with a gun. It's always the first resort. In Dead Street, in a particularly stupid scene, the protagonist fantasizes about shooting a veterinarian in the face. A veterinarian who bought him coffee and wanted to talk to him. The veterinarian's mistake is bringing up a traumatic event from the protagonist's past. That's all it takes to set this guy off. That's not tough. It's pathetic. But Spillane doesn't present him as the damage case he obviously is. No, there's nothing wrong with this guy. Now, I like a tough guy protagonist. Take Westlake's Parker, for instance. He's a guy for whom violence is always the answer. But he's a crook and a psycho. Westlake doesn't hold him up as a hero. Violence also causes Parker as many problems as it solves. In Spillane's world violence only solves problems. Is that what made him so popular? Is there really a longing deep in the hearts of men to shoot every guy who says the wrong thing and every woman who does them wrong? If so, Spillane's success says a lot about human nature, none of it good.
Posted by Nathan Cain at 6:36 PM

Pretty interesting post here, Nathan. Fact is, I got a little further than you did (it sounds) with DEAD STREET and then I was ready to put it down. The only thing that's kept me going is Charles Ardai told me that Spillane died when he was writing this one and another guy stepped in to finish it by writing the last three chapters. So that got me through to that guy's first chapter (9) and then once I got through that and realized it wasn't much better, that's when I gave up.

I found myself wondering how long Spillane could keep going with the amnesiac woman and the guy trying to tease clues out of her. I found out it could go pretty far. To the other guy's credit, I think his writing got a little better, but read the first sentence of Ch. 9 to see how bad he can get as well.

One thing's interesting here: it's an old-time guy trying to make sense of the post-9/11 world and to tie in terrorists, nuclear danger, and street level Manhattan toughs. Problem is, the toughs seems a little too grimey to really get their hands on plutonium...

The other guy is Max Allan Collins, who is a prolific writer in his own right. He writes regularly for CSI, and he's a novelist and a comic book author. He's the guy who wrote Road to Perdition, which I enjoyed. Collins isn't consistently terrible like Spillane, but he's also not my favorite author. I wouldn't hold it against him here, though. He had no choice but to imitate Spillane in this case, which is a sure recipe for bad as far as I'm concerned.
Somehow, I'm not surprised terrorists showed up. Spillane was always big on easy targets, and commies kept cropping up in his earlier books. It makes sense that he would substitute America's new bugaboo for its old one.