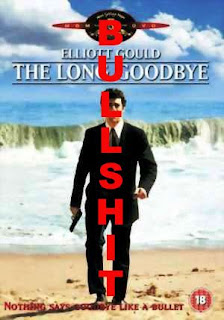 I finally watched Robert Altman's 1973 version of The Long Goodbye, a film that tends to inspire intense feelings on the part of fans of Raymond Chandler. I can see how a movie buff would enjoy it. It's a well done film. I can see how a casual fan of detective movies would enjoy it. It retains enough of Chandler's novel to be interesting. However, I can't see how anyone who has ever read the book could like it.

Altman's adaptation captures none of the emotional resonance of the novel. It dispenses entirely with the relationship between Terry Lenox and Marlowe. Their friendship is the novel's driving force, and the movie puts them on screen together once at the beginning and once at the end. Elliot Gould as Marlowe is left trying to convince us of the depth of the relationship on his own. He fails. His protestations that Lenox was his friend ring hollow.

This hollowness affects the rest of the movie. With no background, Marlowe's quest to clear Lenox's name seems unbelivable, and when the final confrontation comes it has no resonance. Not only does the movie's climactic scene have no emotional resonance, it takes the easy way out, tacking a Mickey Spillane ending onto a Chandler story. The ending of Chandler's novel is a great moment. When Marlowe finally tracks Lenox down and confronts him it's all done with words, but Marlowe manages to eviscerate his former friend regardless, and the reader can feel the detective's heartbreak and Lenox's desperation. Altman managed to turn Marlowe into a cold blooded killer. It's disgusting. Chandler's detective was a lot of things, but he was never a murderer. It's a cheap, shitty Hollywood ending, and it deserves nothing but scorn.

Hmmm... interesting stuff. I actually just recommended this movie over on my site as an all-time classic.
Truth is, I don't see why the movie can't be a great movie on its own. I see it for a movie and I LOVE the novel, but I'm not upset with the movie that it's its own thing. Altman's great, Gould is amazing and the movie's an awesome ride. Gould is his own Marlowe and he's very different from the book's Marlowe: less tough, more clueless and happy-go-lucky, I think, and definitely skinnier. I'm fine with all these. Perhaps it's Altman's genius that he doesn't try to do the book exactly. That would definitely fail.
I have to disagree with you on one major point: I don't buy the friendship between Marlowe and Lennox as being the centerpiece of the book. Lennox is a drunk, a loser. He's more of an inconvenience to Marlowe (that guy who you help even though you'll never get anything back in return) and it shows Marlowe's a nice guy, but they're never truly friends. Sometimes they drink together: seems more like the side-by-side watering of two long-term drinkers than an actual friendship. Chandler's great with the dialogue, but I don't recall any from Marlowe's early evenings with Lennox at the bar. More like Hemingway's "Clean Well Lighted Place" kind of a situation.
So if it's supposed to be the great friendship that drives the book, I don't see it. For me it's Marlowe trying to find out what the hell Lennox pulled on him. He does, says is sucks, and that's that.
In the movie, he seems to have real feelings for the blonde, the wife, instead of Chandler's Marlowe-esque casual falling into bed with her. He feels for her here and SHE's the one who double-double-crosses him, which makes him even madder at Lennox. So he shoots him.
I love the scene at the end when he passes her while lighting a cigarette and doesn't stop at all.

So bullshit? Not in my book. I think it's a great movie. And even if it's different, it feels long enough to be as substantial as a novel, which many adaptations don't.

How about the Arnold cameo in the mid-end? Uncredited. Awesome!

Nathan - I think it's a great movie for all the reasons you didn't like it. I think Altman was passing comment on the 70s as he much as he was on Marlowe - the finale is much more in tune with the mood of the time than the novel's ending was. And, to be fair, the original ending(bearing in mind that The Long Goodbye is my favourite Marlowe story) was fairy-tale material; it was Chandler bending reality out of shape to fit Marlowe's moral code, which was always, for all that he was a tarnished knight, too noble to be real. Would Sam Spade have put a bullet in Terry Lennox? Yes, he would.

Altman enjoyed his status as an iconoclast, and the icon he was gunning for in The Long Goodbye was the very man Chandler admired - the noble detective who walked the mean streets. For my money, it's a terrible movie: dated and neither suspenseful nor good parody. Eliot Gould (ugh!) is insipid, and the whole thing an ill-conceived rebellion against something that isn't even oppressive (I'd much rather have Chandler's myth than Altman's bleak nihilism).

It is a favorite book and I didn’t expect the film to equal it, but it seemed to my wife and me as we left the theater in 1973 that Altman deliberately trashed Chandler’s vision to say “People like Marlowe don’t exist.” Bullshit. Chandler’s book explained how people like Marlowe exist. Even a cynic has a little faith in something. I saw Marlowe and Lennox as two guys who connected and could have be great friends had circumstances been different, but Marlowe, recognizing something familiar in Lennox, mistook pity for faith and bet on the wrong stranger. Since Marlowe wasn’t really like Lennox, Marlowe walked away from him in Chandler’s story, but Altman ignored the difference, missing the whole point of the story. A missed opportunity to retell a great tale.