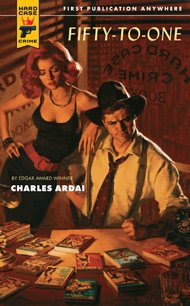 To commemorate the publication of the fiftieth Hard Case Crime title, publisher Charles Ardai has penned a comic what-if novel set fifty years ago about a not-too-ethical paperback pubisher who stirs up some trouble when he publishes a supposedly true account of the robbery of a mafia owned nightclub that was actually penned by a young dancer from South Dakota. Hijinks ensue when it turns out there really was a robbery at the club in question, and the owner is out for blood. To make the novel a bit more fun, Ardai has used the titles of each of Hard Case's fifty titles in chronological order as chapter titles. The result is an entertaining, if overly long, caper. Ardai does a pretty good job in working the book titles into the story, although there are some groaners (the Zero Cool chapter, for instance).

Fifty-to-One is not as good as the novels Ardai has published under his Aleas pseudonym, but it's not meant to be a masterpiece. It's meant to be a love letter to the golden age of paperback novels and a thank you note to the loyal fans of his publishing venture. With cameo appearances by some writers Hard Case aficianados will appreciate, joyful deployment of genre cliches and a color insert of Hard Case covers, this is a book for people who have shelves crammed with paperbacks old and new.
Posted by Nathan Cain at 7:53 PM