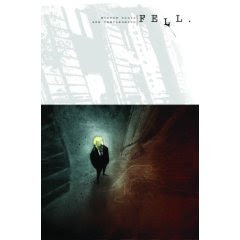 I just finished reading Feral City, the first collection of the Fell comic book series by Warren Ellis and Ben Templesmith. It features detective Richard Fell, who, after a shadowy incident, is transferred to an urban hellhole called Snowtown, where he proceeds solve crimes. I've got to say that, after Transmetropolitan, which was an excellent series, the first volume of Fell is a bit of a disappointment. A big part of it is the format. The individual books were experiments: 16 pages long with roughly nine panels on each page. The idea was to tell a story in a shorter, cheaper format. In theory, this is a great idea, but the visual repetition gets old quick. The muted palette is also a bit dull, but I understand the look the artist was going for.
Ellis is still the king of weird, and the stories don't disappoint in that sense, but Ellis is a much more accomplished storyteller than this volume would lead you to believe. If you want to start reading his stuff, start with Transmet and then move to this. Or, you could just wait for August and the release of his novel Crooked Little Vein, which seems full of promise. Read the first issue of Fell here.
Posted by Nathan Cain at 2:24 PM

Read an ARC of CROOKED LITTLE VEIN last month. CLV is indeed weird, yet compelling. Kind of like a train wreck--you shouldn't look, but just can't help it.

At its core is the idea that no behavior (specifically sexual fetishes of every variety) is unspeakable when it makes its way to the Information Highway. In other words, it somehow becomes part of the mainstream once it's published on the Internet, which makes everything mainstream. Hope that's not too confusing.