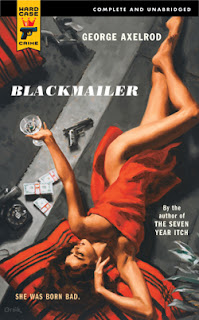 Blackmailer (Hard Case Crime, 2007), is a breezy mystery by George Axelrod, the screenwriter for Breakfast at Tiffany’s and The Seven Year Itch. It focuses on hapless book publisher Richard Sherman as he searches for the final manuscript of famous writer and Hemingway stand in Charles Anstruther. After being offered the manuscript by the titular blackmailer, a young call girl, Sherman finds himself being harassed by gangsters and invited to a party by Truman Capote doppelganger Walter Heinemann. To compound problems Walter’s old flame Janis Whitney, now a movie star, is also mixed up in the missing manuscript mess.

Blackmailer is fun, but not an essential entry in Hard Case’s collection. The story moves at a brisk pace, but there’s not much there, and when it really counts the novel goes into explanation mode, using huge chunks of dialogue to clear up plot points. The last twenty pages of a novel should be filled with action, not explanation.

SHADOW OF THE SERPENT 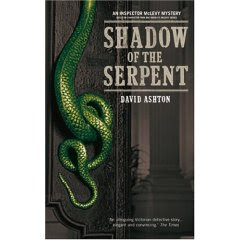 fictionalized McLevy to life for a radio series on BBC4.

Shadow of the Serpent’s storyline is nothing special. After a prostitute is cut down with an axe on the streets of Edinburgh, McLevy follows the clues, which happen to point toward William Gladstone, who is in the midst of running for prime minister against Benjamin Disraeli. When McLevy gets too close to power he is removed from the case, but still manages to save the day.

The characters and setting are what brings the book to life. McLevy is a brooding introvert whose lack of concern for convention and social standing cause more than a little concern for his superior Lieutenant Roach as well as his sidekick Constable Mulholland, who has bourgeois aspirations. Indeed, the interplay between McLevy and Mulholland is one of the highlights of the book. The same can be said for the relationship between McLevy and brothel keeper Jean Brash, who maintain a wary friendship despite their irreconcilable differences. Ashton’s Edinburgh is finely rendered and the cobblestones and gaslight atmosphere adds to the book’s menace.

Inspector McLevy hasn’t made it across the Atlantic yet, so anyone who wants it stateside will have to order it from the UK, or wait until it gets adapted and ends up on Mystery on PBS, which it will.

Fred Zackel’s Cocaine and Blue Eyes (Pointblank, 2006) is a classic of 70’s detective novels, right up there with James Crumley’s Last Good 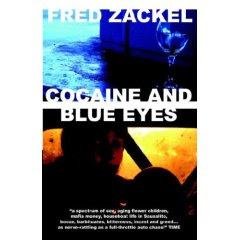 Kiss. How it ever went out of print is a bit of a mystery itself, but the good people at Pointblank had the sense to bring it back.

It should be stated up front that the book bears no resemblance to the OJ Simpson made-for-television movie bearing the same name, and that, if you have been unfortunate enough to see it, you should forget about it right now.

Unemployed PI Michael Brennan gives a guy with a broken down van a ride on Christmas Day. The guy finds one of Brennan’s old business cards and asks him to track down his live-in lover, who ran out on him. Brennan refuses and, a few days later, the man dies in a car wreck. Before he died however, he sent Brennan a thousand-dollar-bill and a picture of Dani Anatole, the girl he wanted found. With nothing else to do, Brennan sets out to find Dani, and soon finds himself neck deep in the sordid affairs of the wealthy Anatole family.

Zackel’s novel is a perfect period piece, capturing the aimlessness and permissiveness of the 70’s, not to mention the sideburns and mustaches. The rainy, empty streets of San Francisco at New Year serve as a perfect setting for a story of ruined dreams and doomed love.